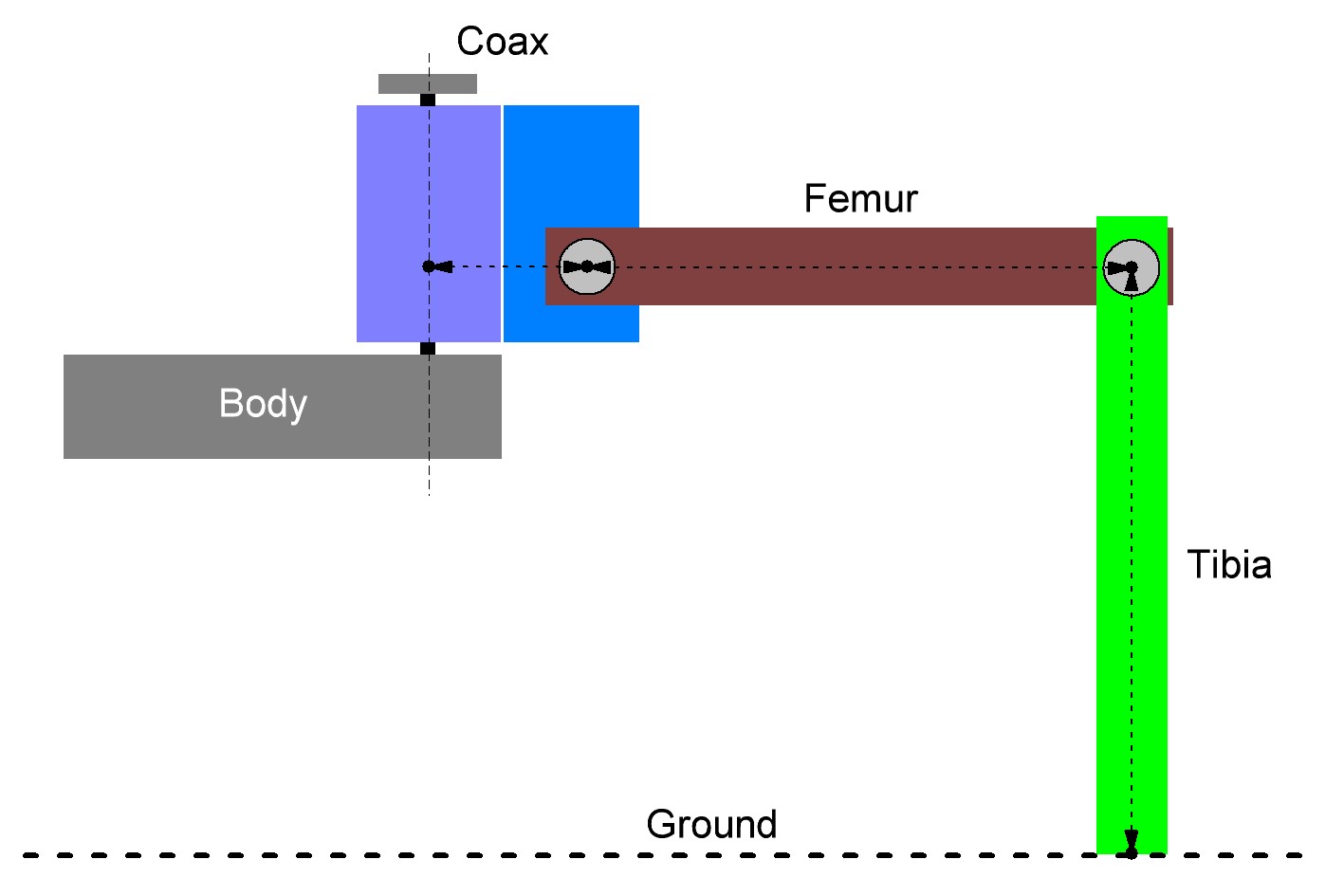 The fictitious red lines show how to align the leg. The thigh "femur" must be aligned so that it is parallel to the floor.

The tibia is perpendicular to the floor and makes a 90° angle at the thigh. If the robot is placed on a flat surface with a mounting aid as shown in the illustration, the distance between the table and the centre of the M3 cross screws can easily be measured with a ruler. The angle can also be easily checked with a ruler by using it as an angle as shown in the illustration. The ruler stands with the short edge on the table and the long side must coincide with the vertical red line.

Figure 70 shows a ready mounted leg in the basic position. Ideally, the red line would run exactly in the middle of the screw heads. Since the servo disks do not allow this due to the toothing and the mounting tolerance, it may be slightly off the mark on some legs. You can now correct this with the calibration.

→ Use a mounting aid: Our mounting aid is ideal for calibrating the legs. The mounting aid is available as a 3D model for download at www.conrad.com under the product. For printing you need a suitable 3D printer. Alternatively, you can of course also use any other base such as a pot, a sturdy box or similar. It is important that the robot stands stable on it and does not wobble; the legs must not be obstructed in the movement. 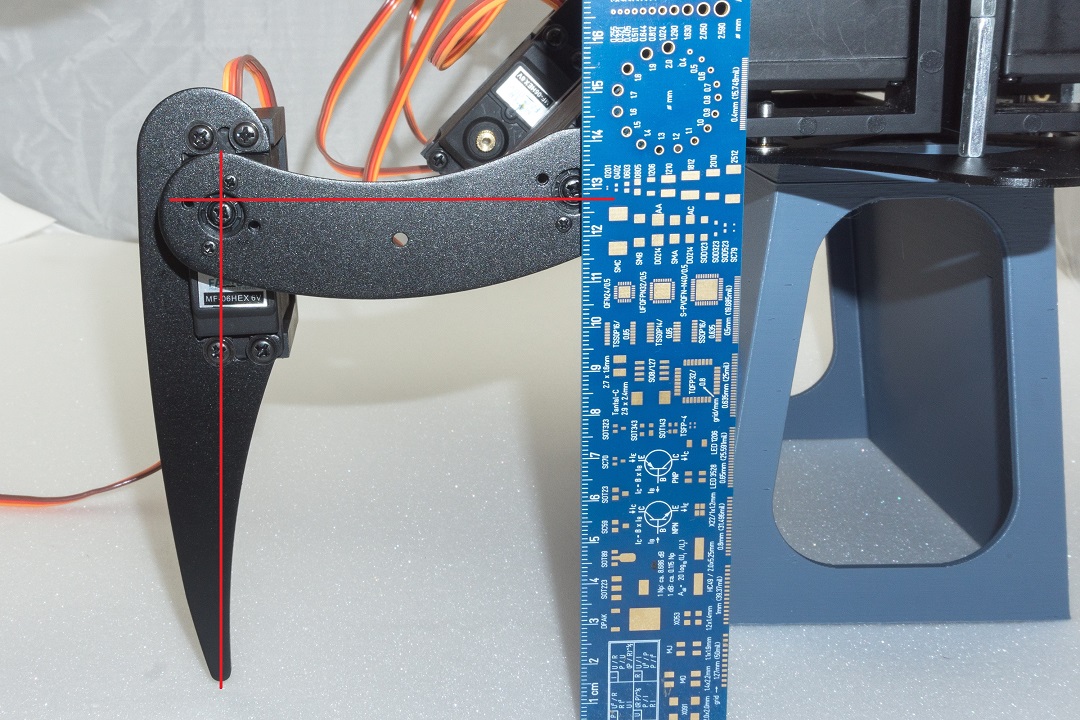 If you are using MAC OS or Linux, you can skip this part and continue with the section "Leg calibration with the Arduino IDE". 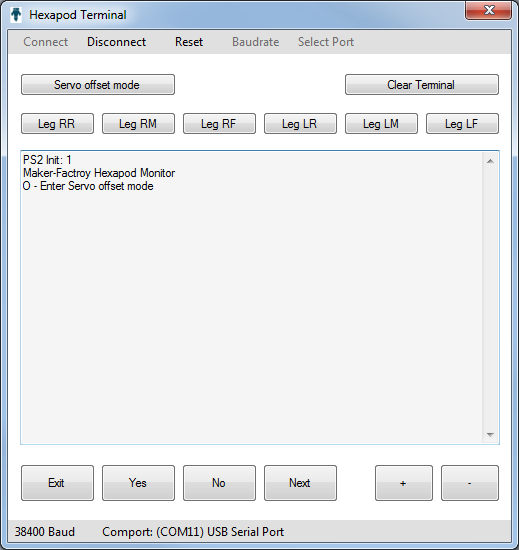 Calibrating legs with the Arduino IDE
If you are using a MAC or Linux, you cannot use the "Terminal" programme (only suitable for Windows). However, you can still adjust the legs by using another terminal programme of your choice. The easiest way is to use the Arduino Terminal. You can invoke this in the Arduino IDE. The figure shows the Arduino terminal after the terminal has connected to the robot board. Proceed as follows: 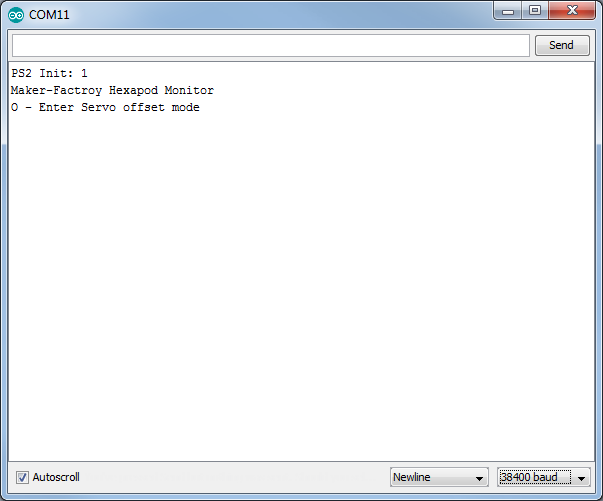 Send an "O" to the robot board by writing "O" in the transmission line and then pressing the Enter key. The robot will now "wiggle" with the chosen servo in the setting.

→ The characters can be written in small or capital letters ("o" as well as "O" is possible). The following message then appears in the terminal: Serial Cmd Line:o

The following input options are available:

When all servos are set, send a "$" character. The programme will now ask if you want to save the data. Send "y" for save or "n" to discard the settings.

→ You may need to perform this calibration procedure again after some time. The reason for this is that after a certain operating time the servos get a larger gear backlash and the first calibration no longer proves to be ideal.

After the Robobug has been assembled and calibrated, you can unscrew the screws M3 x 6 mm (large head diameter 6 mm) and secure them with a screw lock. These are then screwed in again. Also check all other screws for tightness.